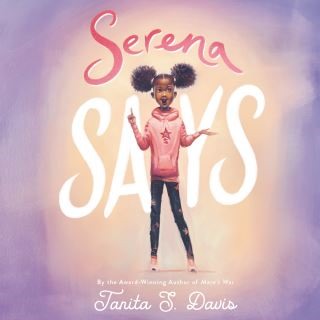 Award-winning author Tanita S. Davis delivers a heartwarming and humorous middle grade tale about a young Black girl who finds her own voice through vlogging and learns to speak out. Perfect for fans for Sharon M. Draper and Lisa Greenwald.

JC shines like a 4th of July sparkler. She has the best ideas, the biggest, funniest laugh, and the party starts when she arrives. Serena St. John is proud to be known as her best friend.

Everything changes when JC returns from the hospital with a new kidney—and a new best friend. Out of the spotlight of JC’s friendship, suddenly things aren’t quite so sparkly in Serena’s world.

Lonely Serena works on perfecting her vlogs, hoping to earn a shot at becoming a classroom reporter. If she can be smart and funny on video, why can’t she manage that in real life? If only she could always pause, edit, or delete conversations. It would be so much easier to say the right thing at the right time . . . instead of not saying what she should, or, even worse, blurting out a secret that wasn’t hers to share.

Life doesn’t have a pause button—but as Serena discovers her voice through vlogging, she learns that she’s not just there to reflect JC’s light—she’s fully capable of shining on her own.

Tanita S. Davis is the award-winning author of six novels for middle grade and young adult readers, including Peas and Carrots, Happy Families, and Mare’s War, which was a Coretta Scott King Award Honor book and earned her a nomination for the NAACP Image Award. She grew up in California and was so chatty as a kid that her mother begged her to “just write it down.” Now she’s back in California, doing her best to keep writing it all down.